Are you Blushing yet? – New& FREE 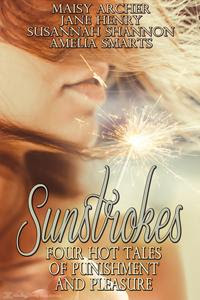 Four authors bring you four stories sure to light up your summer like fireworks on the 4th of July. Some are sweet, some are spicy, and all are a spanking good time.
When Dom and Heidi go camping, their D/s relationship is put to the test. How will their dynamic work while they’re on vacation? Meredith and Paolo heat up the pages in their summer romp in Florida, where sex and spankings are as plentiful as the sand under the boardwalk. Cass and Killian, the Alaskan couple who are always good for a laugh, agree to be filmed for Cass’s new show, but their relationship isn’t quite normal according to the average American viewer. Finally, newly married Anna and Carter simmer in silent misunderstanding until sparks fly, giving one of them a warmed bottom and both a renewed love for each other.
The Perfect Memory by Maisy Archer
Just months after falling for the sexy dominant next door, Heidi has learned that submission is about more than just spanking and hot sex. While she loves Dominic and the relationship they are building, she sometimes chafes under his authority. So when Dom surprises her with a weekend camping trip, it becomes more than just an opportunity to get out of town-for Heidi, it’s also a vacation from the rules and a chance to recreate her happy childhood memories. But when everything that can go wrong does, and emotions run high, will Dom be able to step up and get things back under control? Or will memories be all they have left?
Under the Boardwalk by Jane Henry
For the first time in years, Meredith and Paolo are going on vacation in sunny Orlando. With no work or commitments to keep them apart from one another, Paolo is bound and determined to keep Meredith on her toes, when she’s not over his lap. He will have his way whenever he wants, and she’s more than happy to oblige. As Paolo embarks on a secret mission to find the perfect souvenir, Meredith is curious. What is the perfect souvenir? Paolo is easily able to stay her curiosity with his wicked ways, distracting her with sexy sessions over his lap, and his insistent demands. Yet when unfortunate circumstances put Meredith in a precarious situation, Paolo is determined to remind her that even on vacation, naughty girls get spanked.
Brined by Susannah Shannon
Nothing is hotter than Alaska on the Fourth of July, unless it’s Cass’s bottom if she can’t control her temper. Cass Nelson is showing off her home and her party-throwing prowess in front of a TV crew. As if auditioning for a TV show isn’t pressure enough, her recently separated parents have joined the festivities along with Hazel, her very happily, newly married mother-in-law. Berry shortcakes, breaching killer whales, and more than one kind of fireworks make an appearance, as do the humor and recipes that are always part of a Cass and Killian story.
The Firecracker by Amelia Smarts
Married for less than six months, Anna is easing into her new role as Carter’s wife and Paddy’s mama. Anna wants to please Carter and be a good wife. She certainly doesn’t want to be taken over her husband’s knee for a sound, bare-bottom spanking for disobedience. But her behavior changes when she begins to doubt that Carter loves her as much as he loved his now- deceased first wife, and she decides obedience is not necessarily the best way to respond to her stubborn alpha husband. Tension burns, tempers flare, and a bottom is thoroughly warmed in this short story bursting with passion, persistence and, in the end, a new understanding of the healing power of love.
___________________________________________________________

A Hot Mess by Brandi Evans

Gamble on Love by Brandy Golden