The Cowboy’s Revenge by Zoe Blake 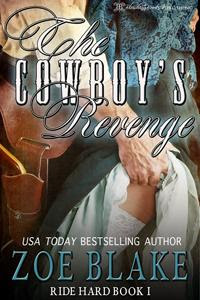 When Mason caught sight of the beautiful woman with honey-brown hair and violet eyes, he could think of only one thing… revenge. For three long years during the War Between the States, he was forced to wait to learn who had murdered his brother. The wait was over. He would take everything from the man; his wealth, his power… his daughter.

Annabelle was getting as far away from Vulture City, Arizona and her step-father as she could, even if she had to marry the boring banker’s son to do it. On the morning she planned to elope, a handsome stranger shows up claiming her step-father lost her in a poker game and she was now his. She will fight him tooth and nail every step of the trail even as his punishments get harsher and more creative.
Ride Hard Series – Three Soldiers, One Single Purpose.
Three soldiers who don’t give a damn about the War Between the States or that they were on the losing side. All they care about is it’s over… they can finally seek their revenge.
Contains anal play, domestic discipline, and creative cowboy-style punishments.
Now available at:
Zoe Blake
#1 Best Selling Author in Victorian and Historical Erotica
We are all attracted to the forbidden. Addicted to the rush we get from reading something naughty…something kinky. We love to lose ourselves in the fantasy. The powerful lord who sweeps the lady away to his remote estate to ravish her. The cowboy who takes the sassy city girl over his knee to teach her a lesson. The devilishly charming pirate who seduces his beautiful captive. I write those erotic fantasies.
Don’t miss these exciting titles by Zoe Blake and Blushing Books!
Papa’s Little Pain Princess
The Submission of Little Emmie
Disciplining the Maid
Penelope’s Punishment
Chosen to be His Little Angeline
The Duke’s Possession
A Captive of Chance

On the 11th Day of Christmas…

Signs of Courage by Hannah Kane