Chosen to Be His Little Angeline, Zoe Blake $2.99 only at Amazon Limited time 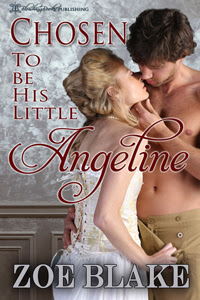 Claimed by a powerful lord who chose to make her his little one.  She was never given a choice.  Naïve and innocent, Angeline agrees to attend an infamously risqué house party full of the ton’s elite. All the common seamstress knows is it is finally a chance for a grand, passionate adventure.

Lord Blackhurst felt a fierce need to possess and protect the child-like woman from the moment he laid eyes on her. After learning she is brought to the party to be a “virgin” sacrifice for the amusement of the other guests, he seizes her as his own. When Angeline insists on placing herself at risk by foolishly engaging in some of the naughty pursuits of the party, Blackhurst takes her, against her will, to his country estate.

Forced into a nursery, Angeline is subjected to daily enemas, diapers, spankings and dreaded training sessions in Papa’s play room.  Can she learn to love this powerful lord and his need to master her through submission?

Chosen To Be His Little Angeline is available exclusively on Amazon this weekend for a special, new release sale price of $2.99.

Quite the lineup tonight. Check out our new releases

Realizing Her Dream by Maggie Ryan and Laurel Jane

An interview with Olivia Starke, Author of The Virgin Bet