Garden of Stone by Lexie Clark 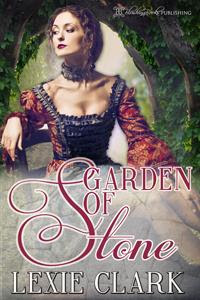 Ursel Seagrove came to Seton Court, the home of the evil warlock Ogden Butcher, to try to uncover a mystery. Witches had been disappearing all over England, and he was the prime suspect. She was too late! Ogden slew her lover right in front of her, then trapped her in stone.
Remington Chase, the best-selling horror novelist, has fantasized about Seton Court for years. The creepy garden with it’s strange stone sculptures was a perfect playground for his fertile imagination. Now, armed with the deed to the house, he can’t wait to use it as the setting for his next book.
He’s drawn to one statue in particular. The stone woman is incredibly lovely. She looked so sad, so desperate, as if she were waiting for a lover who would never appear. When he comes across a book of spells, his words bring Ursel back to life. She steals his heart with a single kiss. Unable to let her go, he vows to join her in her dangerous quest to destroy Ogden before the evil warlock can strike again.
Now available at:
___________________________________________________________