Where is the line between pain and pleasure? 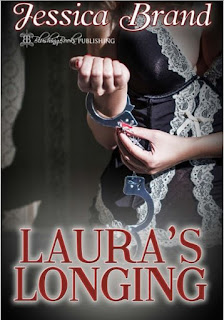 A story of love and exploration. Laura is the quintessential all American small town girl, the vivacious cheerleader who is saving herself for the love of her life. Unfortunately the love of her life is the bad boy in town. Young love being what it is, she finally decides he’s the one to make her a woman and she develops a plan for her fairytale outcome. Unfortunately her fairytale turns into a horror story when she finds her beau, in flagrante delicto with another girl bent over the kitchen table.

In her anger and her grief she seeks solace from her closest girlfriend and after purging some of her pent up lust in the arms of her friend she decides the town is not big enough for all of them and moves to the city to make a new life. Accepting an offer of accommodation in Denver from a mysterious woman a few years older than herself, Laura soon discovers activities taking place in her host’s basement studio that defy Laura’s comprehension. Initially shocked at what she witnesses, her shock turns to arousal as she watches erotic games involving activities she had no idea were possible.

Picking up one of the ankle cuffs, she studied it closely. It was multi-layered brown leather with a shiny chrome D-ring on one side and large chrome buckle on the other. Bending over, she closed the cuff around her ankle, surprised at how comfortable it felt without even buckling it up. Straightening up to return it to its place on the bed, her hand slipped inside her panties, confirming what she already knew. Her body was ready but she was still unsure about her mind. She had two and a half hours to decide.
Taking the collar in her hand, she held it up against her neck. The skin of her neck was particularly sensitive and she had always loved it when Brandon had kissed and gently nibbled it, not that he did it as often as she would have liked. As the leather touched her skin it caused a little shiver to pass through her and she wrapped it around her completely, doing up the buckle just tight enough to be comfortable. Looking at herself in the mirror, she smiled at her reflection, thinking the collar made her look like an innocent little puppy. As she was considering the potential for the evening she wondered whether she was really as innocent as she liked to think.
Switching her focus to the shiny steel handcuffs, she reached down and carefully picked them up, surprised at how heavy they felt. She played with the two halves, swinging one around to see how it slotted into the locking mechanism. She had never handled handcuffs before and they scared her and fascinated her in equal measure, representing helplessness and control. Hearing a click, she realized she had accidently locked one of the cuffs. “Shit. No,” she said, panicked. Yet, she felt a little gush inside her panties she knew was not from her excitement, but fear. “No, no, no,” she repeated as she tried desperately to pull the cuff open.
Realizing her efforts were fruitless, she tried to slip her hand through the locked cuff but found that, as dainty as her hands were, it would not fit through the hole. Tears sprung to her eyes as she slumped down on the bed in utter frustration, trying to work out what to do. She had just failed her first test and she was shattered. Noah’s note made it quite clear. She was to be very careful with the handcuffs and if she didn’t follow his instructions, he would not see her. As she sat there in despair, a thought struck her.
Racing to the bathroom, she grabbed a hairpin. People always used hairpins to pick locks in the movies! It looked easy enough. Surely she would be able to unlock the cuff and save her evening. Slipping the end of the pin into the lock, she began moving it around with no real idea of what she was doing. Sliding it and twisting it this way at that in the forlorn hope that the lock would release, she became increasingly frustrated when nothing happened. Finally she threw the hairpin to one side and desperately pulled on the unrelenting cuff. “Aaarrrgghh,” she squealed as her anger got the better of her.
——————————————–

If power and sexual control are not your thing, it might be better to seek your reading enjoyment elsewhere.

How did you become a writer?
I have harbored an urge to be a writer for many years, figuring I could write as well as many published authors but never having the wherewithal to actually see a story through to completion. When I finally did, I found that people actually liked it and I have continued ever since.

How many books have you written?
Are they all spanking fiction? I now have six published books under two pseudonyms – Jessica Brand and R. R. Greaves. They all have elements of spanking in them but they tend to be more into BDSM, power and control and are quite explicit.
Are you okay in your kink?
I embrace my kink. After keeping it repressed for many years, I realized that you only live once. Just about everyone has fantasies and many of them are about things we would not normally share with family and friends. What goes on between two consenting adults is nobody else’s business and hence the biggest decision should revolve around whether one wants to act out their fantasy or whether they want to keep it in their mind. Once that decision has been made, it’s easy.
Where do you find inspiration for your stories? When you write, do you ever model any characters after actual people?
My inspiration comes from my own fantasies and experiences then I weave them into a story that, hopefully people can relate to. I want people to read my stories and be able to imagine themselves in the thick of the action – either as the dominant character or as the submissive. Some but not all of my characters are modelled on real people I’ve met and played with.

THREE Re-releases from Carolyn Faulkner on sale this week!

New this afternoon… A Timeless Woman by Stevie MacFarlane