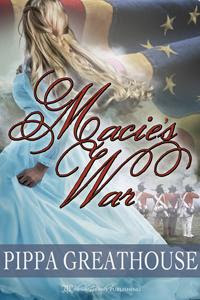 When Macie Welles follows her aunt’s wishes in intercepting a letter to General Howe, in January of 1778, she barely makes it back alive. And she has no idea she will be captured by one of General Washington’s most fierce and trusted men, Captain and soon-to-be Major Jake Wilde. When she is caught a few days later, rummaging through the captain’s saddlebags, she has no idea her whole life is about to change.
Captain Wilde, forced to take her into his tent to strip her and search her, has no idea that, as he looks down into the pleading face of this dark-eyed, golden-haired, beautiful girl, she is about to steal his heart. Is she truly a spy? Could he possibly save her from the fate that awaits her now? Or is it too late?
Publisher’s Note: A sweet love story, with elements of stern, colonial discipline. If such material offends you, please do not purchase.