New release on sale this weekend ONLY! Traditional Change by Alta Hensley

New releases on sale this weekend ONLY!
Traditional Change by Alta Hensley 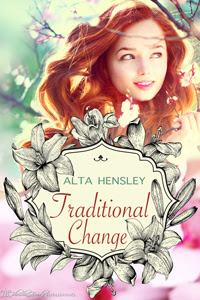 Rebecca Hadley has hit a low point in her life. What with a recent divorce, a crappy job, and nothing to look forward to, she’s a lost soul. Her only solace are her girlfriends-but their happy relationships only serve to highlight her own loneliness.

Not one to wallow in self-pity, she decides it’s time for a change. Time to take chances, be wild, act carefree. And the very first item on her list is a radical one: to get a full back tattoo. What better way to mark the end of one period of her life and the beginning of another?
Sawyer Monroe is a highly sought after tattoo artist, with a long waiting list and a history of dating pierced, inked, kinky women. So when an unassuming little redhead named Rebecca walks into his studio and asks for a custom piece to cover her entire back, he’s amazed to find that she’s getting under his skin just as much as his ink is getting under hers.
It soon becomes clear that even though the two seem to have nothing in common, they find plenty to talk about over the series of their appointments together. For one thing, Sawyer is a firm believer in Domestic Discipline, whereas Rebecca can’t for the life of her understand why so many women-including all three of her best girlfriends-find that style of relationship so appealing…
Until an unexpected turn of events provides her with the perfect opportunity to see what all the fuss is about.
When Rebecca decided to get a back tattoo, she had no way of knowing that it would alter much more than her appearance forever. Sawyer Monroe is opening her mind to things she would never have even considered before, and it soon becomes clear that he wants to give her a whole lot more than some body art.
But can he help her find what she’s been looking for? And will she be willing to accept his offer of a Traditional Change?

Traditional Change is available exclusively on Amazon this weekend for a special, new release sale price of $2.99.

Book Eight in the Red Petticoat Series by Maren Smith is here!