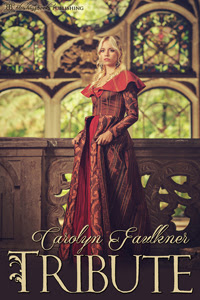 Every month, those in the six kingdoms who had come of age were brought to the L’Ondre, to the kingdom of the Empress that ruled over all of them. There they would be stripped of more than just their clothes – as tribute initiates, they were all the lowest of the low, bought and sold to be whores, servants, even breeding stock for families whose offspring had yet to provide an heir.

Generation after generation, no one spoke of their time as a tribute. It just wasn’t done, so Princess Fleur D’Eylly Royston had no idea what fate had in store for her during the two long years she’d be known as nothing more than Fleur, to be used in any way her master saw fit.

Although he had eschewed the tradition of using tributes in his land, the Sixth Lord of Arundel, Raiz Arndt, had come to the point that he had no choice but to break his own code and avail himself of a tribute. But was that or let his proud, ancient lineage die out.

But with Fleur he got much, much more than he’d bargained for.

Chapter One is available for FREE

Scolding His Witch by Lola Franks