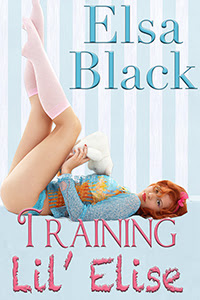 “Max Brookshire looked down at the petite woman, who stared up defiantly despite her bent position. When he spoke, his voice was calm but stern. “Even if you don’t understand why you did wrong, the fact remains that your behavior has been horrid, and you must pay. You, my little one, need a lesson in the kind of humiliation you have heaped on others. Perhaps only then can you truly gain the empathy you are obviously lacking.” He held something in his hand, something she could see. He moved his hand behind her, and for the first time, she felt afraid.”

Welcome back to the Eden Institute, a sprawling manor where young women undergo training in age regression and sexual submission – women like Amanda Wingate, who has now become Lil’ Mandy at the hands of her dominant partner, Ethan Sharpe and the stern Nanny Prim. But trouble is brewing in the form of Elise, one of Eden’s sexiest maids.

Elise secretly longs for life of a Little, even if she can’t admit it to herself. Only Nanny Prim knows the truth. And when Elise’s bitter jealousy towards the Little Ones erupts once too often, she risks being banished.

But Nanny – who has a past with the maid – has a different idea. Why not pair this rebellious but conflicted young woman with a new client who knows exactly what he wants. Handsome Max Brookshire is looking for a little fight. In fact, this caring, dominant Englishman rather likes the idea of using both affection and stern punishment to draw out Elise’s inner Little One. He’ll need Nanny Prim’s help for the task, but a rivalry between Mandy and Elise for Nanny’s affections only complicates matters. Can Elise be transformed from bratty maid to a sweet submissive? Will Nanny’s past with her be an obstacle or an asset? Can Mandy and Elise become friend, or will Elise’s past both inside and outside the Institute prove too much to overcome?

In this very explicit follow-up to “Becoming Lil’ Mandy”, author Elsa Black once again offers more of what drew so many readers to her first book – explicit sex, spankings and medical play – in a surprisingly touching story of a lifestyle that’s become a source of literary fascination for thousands of readers.

While this book continues the story began in “Becoming Lil’ Mandy,” it can be read as a standalone.

Pleasure and Pain by Jodi Bella

The Wrong Man for Her by Carolyn Faulkner

Ace of Swords by Astor Steele