The Carpenter’s Lady by Lauren Shepherd

The Carpenter’s Lady by Lauren Shepherd 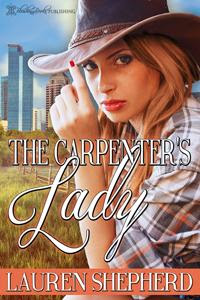 A corporate woman. A country boy. A love that is bigger than both.

Amelia Jensen had a demanding job. She was the regional manager for a major restaurant chain and dealt with dozens of catastrophes on a daily basis. Tall, strong-willed and independent, she might not particularly like her job, but she was very good at it.
William Sutherland learned all there was to know about woodworking at his father’s side from the time he was old enough to hold a hammer. He’d bought a piece of land and was building a cabin on it. Together with his younger sister, he ran a small shop where his handcrafted items were sold. Life was just about perfect. All he needed was a good woman to share his life.
He ran in to Amelia – literally – as they were both rushing to make an appointment. She expected to interview the potential carpenter about doing some remodeling to the restaurants, and he was the carpenter, hoping to land the job. He was attracted to her from the start, although she worked too hard and didn’t take care of herself half enough.
The passion between them built quickly and they found themselves tangled up in each other. Amelia struggled to come to grips with her burning desire for his affection, and his firm hand on her backside. When a disgruntled former employee threatened everything they held dear, they had some difficult decisions to make.
Could they build a future together?

Submitting to the Lawyer by BJ Wane

Her Gentle Soldier by Carolyn Faulkner