The most controversial book of 2017 ~ Carolyn Faulkner 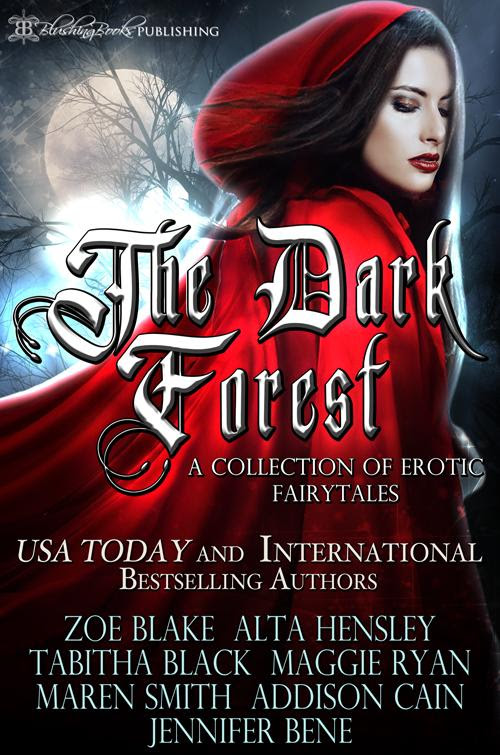 Enjoy seven wicked tales from seven bestselling authors, each more deliciously deviant than the last!
Nothing is as it seems in our dark and twisted fairyland. Princes are not charming and the path to happily ever after is paved with creative punishments and supplication. Do not fret for our fair maidens. These are still fairytales. Love will conquer all in the end.
BEAUTIFULLY PRIMAL
A Beauty and the Beast tale by Zoe Blake
Beatrice the Beastly will be tamed by no man. Prince Rhys is determined to possess her on his terms. Will she respond to his rough handling or deny them both their destiny?

SLEEP, MY BEAUTY
A Sleeping Beauty story by Alta Hensley
Briar Rose has one choice. Submit or die. But when she meets her trainer, a sadistic and damaged man named Prince, she soon realizes that her choices are not so black and white.
In a world cast in an apocalyptic nightmare, is it possible for one woman to find her happily ever after?

SAVING ELLA
A Cinderella tale by Tabitha Black
Trapped in a life of endless drudgery, Ella has just one joy; rock god Zainon Matthews. Every night before falling into an exhausted sleep, she wishes he would magically appear and whisk her away to a happily ever after. She has no idea how close she is to getting that wish… or the dark,

sadistic desires Zainon will expose her to.

THE TOWER
A Rapunzel story by Jennifer Bene
When one of her father’s enemies rips Rebecca ‘Rapunzel’ Sinclair from The Tower and takes her prisoner she is dropped into a nightmare of pain and pleasure. As her masked captor works to break her down will she be able to face the darkness in her past, and the dangerous desires she’s discovering inside herself?

NIGHTMARES IN WONDERLAND
An Alice in Wonderland tale by Addison Cain
When darkness falls, Alice hears the tick-tock of the grandfather clock, and the hosts of Wonderland come out to play. The Hatter has all the power, loves to twist and taunt, and is eager to draw sweet Alice into a never-ending nightmare of degradation and fun. Tea anyone?

GOLDI IN CHAINS
A Goldilocks story by Maren Smith
Breaking into that house was every bit as easy as Goldi had been led to believe. What it wasn’t, was empty and shifters (particularly were-bears) were not known to be forgiving. Now, trapped in the terrifying dark of their basement dungeon, Goldi knows she’s in for a long night of carefully exacted revenge.

Get your copy today!

_______________________________________________________________
Enjoy this free preview of The Dark Forest:
_________________
Beautifully Primal Warning
You hear the bark and fear the bite but cannot escape the Beast’s dark embrace. Your wild nature calls to his own and demands to be tamed. Resistance will not be tolerated, the Beast will have his way.
Enjoy!
Zoe Blake
Chapter One
A purple mist snaked its way through the deep, dark forest. The malevolent moon cast an ominous glow on the barren earth below. The unsettling scream of a raven could be heard high above the crippled and twisted tree branches.
Her breath came in tortured gasps as her slippered feet slid and tripped along the slick, frozen ground. Reaching out blindly in the darkness, she fell against a tree trunk. The sharp edges of the bark pressing against her soft cheek and the palms of her hands. Heedless of the bite of pain, she withered to the cold ground. Her rich, velvet gown pooling about her like a death shroud. Casting large anxious eyes about, desperate to see through the gloom, she searched the shadows.
Is it gone?
Did she lose it in the mist?
The sickening sound of splintering wood cracked like a whip through the unnaturally silent forest. A heavy thunderous tread rolled closer and closer still. The rattle and crunch of crushed underbrush was punctuated by guttural snorts and grunts.
Forcing her stiff and cold limbs into motion, she grasped the roughened tree trunk, using it to pull herself upright.
She must keep running.
It was getting closer.
Her skirts felt wet and heavy with frosted dew, chilling her fingers as she fisted large swaths high above her ankles. Willing herself on, she ran deeper into the forest.
Her mouth opened on a startled scream as her body was wrenched forward, then ruthlessly back by a heavy weight on her skirt train. Desperately pulling on the fabric, she looked down to see it pinned under one large, black paw.
Screeching in terror, she fell to the ground. Twisting her body till she was on her back, her fingers digging into the frigid dirt as she tried to claw her way backwards. Her feet helplessly kicking through her skirts, trying to dislodge her attacker.
There was a low, feral snarl.
She stilled.
A second paw pressed against her hip. Through the mist, the beast, covered in sleek, ebony fur slowly came into focus, shifting its massive weight to hover over her slight form. The first paw moved, stepping on her thick curls as they fell in waves about her, forcing her to remain prone and still. A thick obsidian mane framed a long, powerful snout and startlingly bright green eyes. It was the beast’s eyes which mesmerized her. Captured her. She forgot to scream. Forgot to breathe as she fell under their spell. Filled with almost human emotion, she could read their primal intent.
“Please,” she begged.
The beast cocked its head to the side, as if it understood her plea. Its muscles bunched and shifted as it leaned forward on its paws. Its strong chest bearing down on her breasts. Pinning her under its weight, his snout pressing against her neck. The beast was learning her scent. Reflexively, she inhaled. It smelled of moss, cedarwood and honeycomb. Her brow wrinkled, confused. She had expected the sick, acrid scent of blood.
The warmth radiating from the creature’s body spread over her own, banishing the night’s chill. The silken strands of its mane brushed her cheek as its snout moved downward. Her body trembled with an unnatural response as the tip of the beast’s tongue lapped along the ridge of her exposed collarbone. Alarmed, she tried to get away. Rising on her elbows, ignoring the sting of pain as her hair trapped under his paw pulled and tugged.
The beast’s mouth opened on a low growl, exposing long, white teeth. The points so thin and sharp they appeared almost opaque. With a whimper, she sank back to the ground, lying helpless under its restraining weight.
Watching its captured prey intently, the beast lowered its snout to trail between her breasts, down her middle. Again, reading an almost human response in the evergreen depths of its eyes, her breath grew ragged and uneven. As its powerful body prowled closer to her hidden core, fear of both it and her own response overcame all else.
Springing upward, she latched onto its mane, filling her small hands with its silken weight. The beast reared back with a roar, pulling her with it. On its hind legs, it towered over her petite frame. Her slippered toes barely skimming the icy peaks of grass that covered the earth. Her body was forced flush against the beast’s powerful chest as it dangled, held aloft only by her faltering grip on the beast’s fur.
As the beast’s head tipped back on a deafening bellow, the ebony fur morphed into red, moth-eaten rags. The sharp teeth became blackened and blunted. Its majestic snout, shortened to a broad, flat nose. The beautiful emerald greens eyes become a colorless, watery gray. His deep-throated roar shifted into a high-pitched cackle.
It was the gypsy woman from the fair two summers ago.
Loosening her grip, she fell to the ground, staring at the shriveled woman in horror.
Pointing one gnarled hand towards her, the gypsy woman, spat out, “I curse you! You, who are arrogant, who hold yourself above all those around you. Your beauty is your curse. You shall only know happiness through pain, will only find love through supplication to the beast. Be forced to yield to the hand of your master or face your destiny alone!”
***
Beatrice awoke with a start. Her legs tangled in the heavy, velvet bed covers. Her breath visible in the frigid bedchamber. It was a dream, she told herself. Just a dream.
_______________________________________________

The Brothers Rule by Carolyn Faulkner

The Stonemason and the Lady by Emily Sharpe

Eclipsing the Sun by Lexie Clark