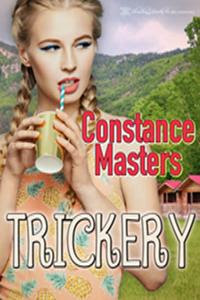 Morgan King is a twenty-three-year-old virgin who has never had a proper boyfriend. The fussy young woman longs to meet a man who will be everything like the heroes in the spanking romance novels she loves to read. When such a man comes along, Morgan is sure that he must be too good to be true. Although they’ve had a great online relationship for months, she balks at actually meeting him.
Jackson Brooks is a twenty-nine-year-old middle school teacher who works at his family’s summer camp. When he gets to know Morgan on the Internet, he is sure she’s the girl for him. They are both ready to settle down, and he doesn’t understand why she is so hesitant to meet him in person. When he discovers that she has sent him a fake photo, he is not happy. He can’t deal with it right away, however, because summer camp is about to begin, and this year, he’s the director. He decides to give Morgan some space while he does what he has to.
Morgan is devastated when she realizes she has probably blown things with Jackson. She is desperate, and hatches a plan to get to know him secretly. She books herself into Sunnyvale Summer Camp under the name of Alyssa King, using her sister’s birth certificate. Instead of assuring herself that nothing could possibly go wrong, she should have been asking herself what would happen when Jackson discovered her deceit. Will he be so angry that he sends her away, or will he choose another method of showing his displeasure – demonstrating that insects aren’t the only things at camp that sting?
Now available at:
___________________________________________________________

Restraint by Tabitha Black – New this weekend & on sale!