Tell us about your new release.

My new release is called Instincts Awaken, and it’s the first in a series of urban fantasy romances.  It provides an introduction to the world of the modern fae through the eyes of Clare, an eighteen-year-old half-fae who has been raised away from the community after her mother fled a harsh and restrictive life among her own people.  My take on the fae is that they’re simultaneously more and less civilized than humans.  They are, for example, primarily peaceful, and very magically aware.  But they also have strong animalistic urges that can be difficult to contain.  In particular, they have very strong dominant/submissive instincts, usually along gender lines.  Clare has to accept restrictive training in order to come to terms with her own instincts, which have gotten her into a lot of trouble.

What was your favorite chapter (or part) to write and why?

I love world-building, so creating the whole hidden magical community was a pleasure.  But I think my favorite moment is when Clare finally accepts that she has to surrender her will to her Uncle Liam and begin training to be mated.  She’s so frightened and doubtful about the whole thing, but as she slowly begins to understand that no one means to hurt her or make her unhappy, she finally sees the beautiful side of what’s scared her so badly, the freedom from worry and fear that her surrender will give her.  It’s a very sweet and tender scene.

Are you working on a new book right now? Can you tell us a little about it?

I’m currently gearing up for the third book in this series.  It’s a little more suspenseful than the first two—it centers around a young woman who’s being stalked by an incredibly powerful illusionist who’s able to prevent even those who love her most from seeing the danger that she’s in.  The only one who can protect her is a part-fae peacekeeper with the ability to see through the illusion, and both of them have a hard time trying to figure out if their love can be more than just a reaction to the terrifying situation she’s in.

What has been the toughest criticism given to you as an author?

I was told once that my writing was “simple.”  At first I went into a rage because even my most straightforward stories ask, I hope, a lot of interesting questions.  But eventually, I came to see it as a backhanded compliment—I work hard to write clean, transparent prose, and I guess that means I’d succeeded!

And, what has been the best compliment?

I’ve been told my characters always feel like real people—that there are no Princess Perfects or Prince Charmings.  That makes me very happy.  While I love fairy tales in and of themselves, I love the weird gnarliness of people.

Is there anything you find particularly challenging in your writing?

I struggle with action.  I love writing dialogue and close, quiet interactions, so I often have to remind myself to get my characters out and about and let life wallop them around a bit.

Do you spend a lot of time doing research?

I try very hard to limit it because research can mean the difference between a productive morning and nothing to show.  I’m very, very particular about historical accuracy, which is one reason I only write a few eras I know very well.  But I do a lot of looking things up on the fly—I’ve even looked up bus schedules for regions I didn’t know well!

So, what book are you reading now?

I’m just beginning The Mermaid’s Sister by Carrie Ann Noble.  Who could resist a title like that?

For Fun- tell us your 5 favorite movies. Why? 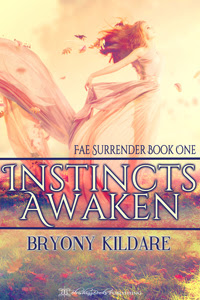 In the hidden community of magical Chicago, where humans, Fae, and supernatural predators live side-by-side, half-Fae, Clare, lands in trouble when her long-suppressed instincts begin to surface in inappropriate displays. Though she’s an adult by human standards, the Fae kinship courts order Clare into the custody of an uncle she has never met. Though fearful that she will be mistreated, her uncle’s strict, affectionate handling brings her a deep submissive pleasure. Long neglected, Clare begins to blossom emotionally and sensually as she submits to preparation for a traditional Fae mating, and it’s not long before her burgeoning desires draw attention.
Forest keeper Rory Seaborn is a full-blooded Fae whose cynical attempts to keep a distance can’t withstand the submissive signals Clare is putting out. But if she chooses to accept Rory’s attentions and become his mate, Clare is committing to a life among the clannish Fae-and a life of complete submission. Can Clare surrender herself entirely to gain her deepest desires?