Having Faith by Louise Taylor

Having Faith by Louise Taylor 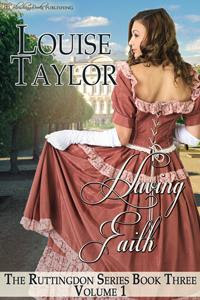 Never trust the wrong man, especially with your heart. But how does one know ahead of time he is the wrong man?

In the case of innocent vicar’s daughter Faith Halstead, governess to a middle class family with a marriageable son, one only finds out he is a cad after it is too late. Now she is alone in the world, a fallen woman, facing a bleak and uncertain future.

While leaving London in disgrace, a chance encounter on the train lands Faith in front of the darkly dominant Duke of Buckingham. He is in search of a woman to serve as his slave at an upcoming Ruttingdon Club house party, and the shy, modest young woman has unaccountably captured his attention.

Desperate for any excuse not to return home to her harshly judgmental father, Faith rashly promises to serve as the duke’s absolute slave for a week, alone with him at the secluded Ruttingdon Hall.

Will his dark and brutal desires and the oftentimes sweet pain he inflicts upon her ripe body drive her away, or will the awakening desires in her heart seduce her into staying longer with him – perhaps forever?

The Russian Bride by Juliette Banks