His Forbidden Submissive by Brandi Evans

His Forbidden Submissive by Brandi Evans 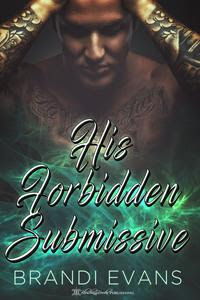 To find happiness, she must do something she swore she’d never do again. Let a man control her.
After beating cancer, Vivian goes on a mission to cleanse her life. First on the list; kicking her cheating, controlling husband to the curb. Second, she must discover the answer to a question that’s been haunting her. Is the love she harbors for Brock, her bad-boy brother-in-law, genuine or a chemotherapy-induced illusion?
Brock loves a woman he cannot have; his brother’s wife. To claim her would be a betrayal. He knows loving her is wrong but he can’t help it. So when circumstances bring them back together, he can no longer deny his forbidden attraction, and they unite in a fury of passion, lust-and bondage.
But Vivian isn’t prepared for Brock’s BDSM lifestyle, no matter how sexy he looks with his tats and leathers. After ten years with a controlling husband, submission is terrifying-but so is the thought of never being with Brock again.
Submission or freedom? No matter which path she chooses, her life will change forever.
Publisher’s note: His Forbidden Submissive contains adult material, including very strong language, depictions of bondage and discipline, and graphic descriptions of sexuality. If you do not care to read such material, please do not open this book.
Please enjoy this free preview of His Forbidden Submissive:
Prologue
His sub was quite spectacular when she came.
Brock Michaels stood between the splayed legs of the woman tied open to him. Her ample breasts quivered with each unsteady breath she raked in. Creamy thighs invited his attention, the invitation complemented by the dark thatch of curls surrounding her pussy, the spot where his fingers were currently shoved, thrusting into her, this pretty little sub who had willingly given herself to him for the night. But only ever for the night. Until the sun rose, she was his to use, to enjoy.
To control.
“Sir,” she said, and groaned through her fourth climax of the evening, the inner walls of her channel soaked and pulsating around his fingers.
Brock drank in every inch of her. “You are so animated when I make you come, little sub. It pleases me.”
But she didn’t please him. Not really. Not in any way that truly mattered. How could she?
She wasn’t the woman he loved.
When her labored breaths transitioned into shallow puffs, he leaned close and examined her. Long brown curls clung to her sweat-glistened forehead, her cheeks. He drew a knuckle over her jaw.
“What do you think? Have I made you come enough for the night, sub? Or would you like more?”
As he waited for her response, he twisted and turned his fingers inside her. The sheer amount of honeyed heat sent lust rocketing straight to his groin, working his cock from aroused to rock-fucking-hard. Maybe tonight, if he tried really hard, he could get more than his cock to participate in their scene, but he wasn’t holding his breath.
His excitement hadn’t extended above waist level for the past year.
“I’d like more, Sir.” She lifted her head and stared at him through glassy eyes. “Please.”
“Good answer. But this time…” He withdrew his fingers from her body and grabbed one of the condoms littering the nearby table. “I’m going to fuck you to climax.”
“Oh, thank you, Sir. Thank you.”
He wasted no time freeing the erection straining his leathers and then rolling the rubber onto his length. He wasted even less time plunging deep into her ravished pussy and pounding like crazy.
“Sir!” she screamed as he fucked her, begging him to take her harder, and he did his best to keep her screaming as long as he could.
In no time, he had her teetering on the edge of another apex, but his climax was a totally different story. He still needed more, but what he needed he couldn’t get from the beauty on the end of his cock, or any of the random subs who had come before her. He needed the one woman in the cosmos he could never have.
No. Brock closed his eyes and forced down the sudden images threatening to overwhelm him. No. He couldn’t have her, and thinking about her would only cause him more heartache. But keeping her memory at bay was like trying to hold back a raging river with a bottle of Krazy Glue and a handful of popsicle sticks.
“Fuck!”
With the fury of a tsunami racing toward a coastline, images of the woman he lovedbombarded him.
Vivian.
Emotions he hadn’t been able to purge stampeded through him, infused him with a need that only sliding into her petite body would slake. Image after image filtered through his mind. Despite their separation, he still wanted her with every fucking breath he took.
What would it take to finally get her out from under his skin?
If gallivanting the globe, putting the finishing touches on the house he’d built, and launching his own brand-spanking-new BDSM club and BDSM-themed restaurant didn’t do the trick, what the fuck would? He needed Viv like a Dom needed a sub, but he couldn’t have her. Not unless-
He throttled the rest of the thought before it could fully manifest. He loved Viv, yes, but he couldn’t have her. To claim her would be a betrayal, even if the man he’d be betraying didn’t deserve his loyalty. And if by some miracle he ever could have Viv, he’d have to tell her about his BDSM lifestyle, which would probably send her screaming for the hills.
No two ways about it; fate had dealt him one shitty hand.
Pounding into his sub faster, harder, Brock let his frustrations fuel his moves. He pistoned into his sub’s heat, but his near-frantic thrusts did jack shit to mend the gaping wound in his chest. Nothing, no one, would ever be able to heal that wound. No one except Vivian.
His forbidden submissive.

The Coming Storm by Jessie Jones

A Little Misunderstanding by Markie Morelli

A Creature of Spirit by Raffaella Rowell