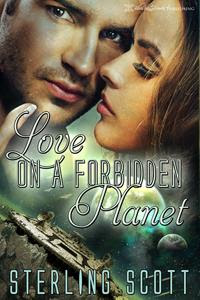 Amy Toller is responsible for determining which alien species are intelligent and which aren’t. It’s her job to travel to different planets and observe the aliens from afar. Between her exciting planetary explorations, the boredom of interstellar space flight is relieved by her boyfriend, Mario. Snuggled in Amy’s cabin, Mario’s explorations take her emotions – and her body – to places she’s never experienced before, and when he spanks her for the first time, she is amazed at the response it evokes in her.
Halfway through the mission, the captain orders Amy down to the surface of the planet Corvus-3 to complete an assessment of the natives, and to decide whether they can mine the planet for lanthanum, which Amy’s people desperately need to survive. Unfortunately, the savage Barbas have also discovered the mineral deposit. The Barbas are Amy’s home planet’s mortal enemies. Savage and ruthless, they will go to any lengths in order to access the valuable mineral.
When she finds herself stranded on Corvus-3, Amy is forced to join the planet’s native alien population to suvive. She finds herself taking part in all their daily rituals, including their nightly orgies with spanking as foreplay. As a result, she gets very close to these primitive near-humans, and soon finds herself in a one-woman war to save them – and the galaxy – from the Barbas.
Will she succeed? And what of Mario? Did he remain on the ship which seems to have abandoned her to her fate? Will she ever see him again?
Publisher’s Note: This exciting sci-fi tale is not a typical M/f romance. It contains explicit sexual themes with multiple partners, including spanking, exhibitionism, anal, and voyeurism. If such material is likely to offend you, please do not purchase.
Now available at: