Welcome, Bethany. Thank you for sharing with us. We’re thrilled to welcome you to Blushing Books.

Your new book is called At Dead of Night – what is it about?

At Dead of Night is a contemporary murder mystery set in England. The main character, Lucy, works for a private detective agency and investigates the death of a well-known evangelical Christian, Marilyn Carter, who supposedly fell from a cliff-top while walking on her own at night. Lucy’s investigation brings her back in contact with her ex-boyfriend, Noel, who she still loves, but walked out on because he’d spanked her for risking her life on a previous case. While she investigates the Marilyn Carter case, Lucy also has to decide whether she can accept Noel’s discipline as a part of the relationship she wants to have with him.

Is this a detective story or a romance or both?

It’s primarily a detective story – Lucy does a lot of sleuthing. She investigates suspects, hunts for clues and finds red herrings – but the case also helps her to work out her conflicted feelings about being spanked by Noel. There is plenty of romance in the story, and Lucy does some of her sleuthing with a sore bottom.

Is this your first book?

It’s not my first published book, but it is the first book I wrote. I originally wrote it as a detective story, and while I came up with the murder mystery plot, clues and twists very quickly, I struggled with Lucy and Noel’s relationship. I wanted them to have split up and to meet again during the course of the investigation. I tried several scenarios – she’d been unfaithful and regretted it, he’d been offered a dream job overseas but she didn’t want to leave England – but none of them worked. I had one flashback scene in which he gave her a playful spanking, and in the back of my mind that was always a part of their relationship – but I didn’t think anyone would ever publish a book in which the hero spanked the heroine! Not in the twenty-first century! Then, a couple of years ago, I discovered there actually were publishers who specialised in books where the hero spanked the heroine. Yay! And so the whole Lucy/Noel conflict suddenly fell together and felt realistic for them, in a way my other scenarios hadn’t.

What other books have you written?

Freedom, a novella set in an alternate Edwardian universe, was published by Blushing Books in December. That was set in a universe where women were the property of their menfolk and subject to their discipline – the main character, Lady Margia, is fighting for the rights for women to vote and to own property rather than to be men’s property. I have a collection of short stories coming out with Blushing Books later in 2016.

Lucy! At least I was most like her when I was the age she is in the book – 29. Work-oriented, often seen having a cider or two down the pub, fond of a skirmish that ends in a spanking – but not so fond of being told what to do.

At Dead of Night by Bethany Leigh 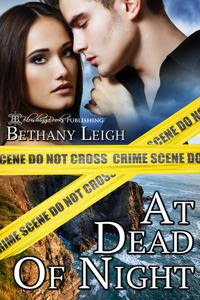 Lady Cassandra is betrothed to the man she loves – but she doesn’t think it right that he will inherit her family’s estate one day. So, with two friends, she attends a Freedom for Women League rally. Lady Margia and the Freedom for Women League are fighting for the right of women to vote, own property, and not be subject to the discipline of their menfolk.

The campaign could change Lady Cassandra’s future – but when she gets caught attending the rally, it makes her present life a lot less comfortable…

Lady Margia and her Freedom for Women League are scandalising Edwardian England – demanding the right to vote, own property, and not to be spanked by their menfolk. Lady Margia is determined that her campaign will succeed – whatever the cost. But how can she reconcile her beliefs with the attraction she feels towards the traditional Sir Cormac Adair?

Meanwhile, Lady Isobelle sees Lady Margia’s campaign as her chance to inherit her family estate, and, along with her maid Edie, breaks household rules and attends a local rally.

Join Lady Margia, Lady Isobelle and Edie as they hit the campaign trail, encountering intrigue, romance, spankings and surprises along the way.

She enjoys writing (and reading!) about strong-willed heroines crossing swords with alpha heroes.

She also blogs at http://bethanyleighromance.blogspot.com.au/

An Interview with Annamarie, of Carl Hamlin’s Eclipse