New releases on sale this weekend ONLY! The Emerald Virgin by Ravyn Rayne

New releases on sale this weekend ONLY!
The Emerald Virgin by Ravyn Rayne 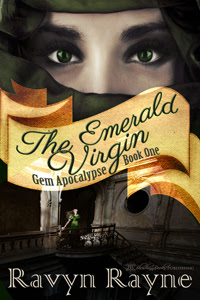 Emerald – a girl with green eyes and a rarity after the horrific genocide that slaughtered millions. After the war, King Gideon rose in power. A lust- filled and greedy king that believed in the power of slavery.

At eighteen, women were required to come before King Gideon and his four sons, to offer themselves as a courtesan. The princes took only those they found most attractive and alluring. The rest were returned to their homes with a brand on their wrist proving they had been through the process and rejected. Ignoring the ritual was punishable by death.

Aria Stone had been kept hidden from the princes and the ceremony, because she was an Emerald. At twenty-three, the royal guards storm her home, murder her mother, and drag her to court. She must face the four princes.

The Emerald Virgin is available exclusively on Amazon this weekend for a special, new release sale price of $2.99.