New this afternoon… Ever Lasting Hope by Maggie Ryan 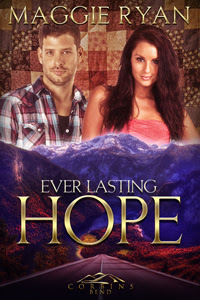 Everleigh has waited for weeks for her fiance’s return. Rob had been overseas for six weeks and his absence was almost more than Ever could take. Even knowing that he was going to take her over his knee for ignoring his instructions didn’t dampen her desire to have him home. After a few weeks of constant togetherness, Rob sees a change in the woman he loves. As their wedding draws closer, his sweet Ever was threatening to turn into one of those horrid Bridezillas. He decides she needs a different project, one that captured her artistic spirit. Ever is all for following this order but finds her original plans change when she learns of a project that will allow her to honor the men and women who serve their country. The residents pull together to help these injured soldiers. Tory’s husband, John, needs more than his wife’s love and as a fellow resident of this special community, Rob takes on a project of his own. Ever finds that art takes many forms and hope is everlasting as long as there are people in the world that reach out to help their fellow man.

The Scheme by Dakotah Black

New: Rule 13 by PS Cassidy and Cheyenne and Jason by Misty Malone

New and on Sale: To Master and Defend by Anya Summers