New this evening… One Shot by Nikki Ryan

New this evening…
One Shot by Nikki Ryan 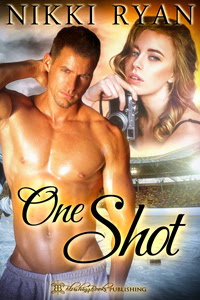 Laci Walker thinks she’s successfully put the past behind her – until she finds herself face to face with the man who shattered her heart to smithereens four years ago. He had been drafted into the NHL after they had both graduated from college and yet, instead of sharing the accomplishment with her, he’d walked away, leaving her completely devastated. Now here they are, together again, in the Boston Bruins locker room. He even had the nerve to smile at her. Laci wants to grab the nearest hockey stick and shove it down his throat. The jerk.

Matt Lindberg can’t believe it when Laci walks into the locker room behind his coach. She was – and always will be – the love of his life… the one woman who dominates his thoughts during the day and haunts his dreams at night. And he’s determined to marry her.

His first order of business now, though, is to prove to her that their love is worth fighting for and can be resurrected. Judging by the look on her face, it’s not going to be an easy task.

Matt knows he has only one shot to make this right and he’s determined not to fail her again.

Who is this Elsa Black, author of Becoming Lil’ Mandy?