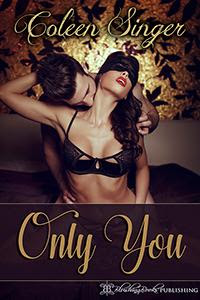 Riker Spelling couldn’t help the fact that he found himself on her doorstep, offering to help her get over another heartache.  A more serious one than usual, but still, the bad ending to a relationship that wasn’t with him, the man she considered to be a brother.
He and Kyah Martin had been best friends since neither of them knew what a best friend was, but he wanted more than that from her.
Kyah looked at her successful, gorgeous best friend and knew that she wasn’t the woman for him, despite the fact that the both of them knew they were sexually compatible. He needed to marry a Victoria’s Secret model, which she, most definitely, was not.  She had to keep him at arm’s length, for his own good.
But when she let Riker in, she had no idea that he intended to settle for nothing less than what she had given to the fiancé who had run around on her.
He didn’t just want to be her boyfriend, he wanted to be her Dom.
Publisher’s Disclaimer: Contains graphic sexual scenes and punishment spankings.
Now available at:

Until You by Measha Stone

New: The Man She Needed by Ruth Staunton, Tears of a Vampire & Vlad’s Story by Carolyn Faulkner

The Sicilian’s Obsession by Selena Michaels