Smart as a Whip by Judith Anderson

Smart as a Whip by Judith Anderson 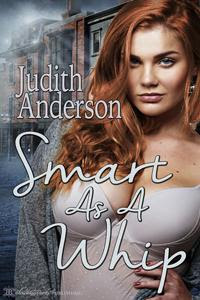 Coming close to giving up on her cherished dream of following in her father’s footsteps, Kimber Cassidy, a plus-size voluptuous beauty in her mid-twenties, jumps at the chance to clear the name of a family friend, Manny. There’s been a murder at a local BDSM playspace and Manny’s been framed for the crime. In order to keep an innocent man from spending his life in jail, Kimber needs to use the logical and analytical skills taught to her by her father, a detective with the East Alton police, who was killed in the line of duty when she was just sixteen.
During her investigation into not only the murder, but also the sexually provocative BDSM lifestyle, Kimber will need to use her wits to gather all the facts and figure out who killed a member of The Playspace; a local kinky club. But it won’t be easy. During her adventure, she’ll come to know things not only about her family, but about also about herself, that will shake her to the core.
Things become even more complicated when Kimber meets Jeremy, another club member who is as sexy as he is dominant. As she delves deeper into the world of spanking and bondage, she discovers her deepest dark desires, but will she get lost in them? Only by relying on her father’s advice, facing her fears, and realizing who she can trust and who she can’t, will she be able to keep a man from suffering for a crime he did not commit.
Now available at Blushing Books
Chapter One is available for  FREE
___________________________________________________________