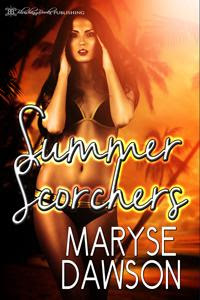 Travelling abroad has its challenges, and these adventurous girls soon find out that a warmed bottom is one of them!

Natalie Havers is spoiled. When her dad charters a private yacht for a two week holiday, she thinks to have everything her own way. When she goes swimming, ignoring the crew’s warning that a squall is coming, handsome Captain Cas Connors is the first one in to rescue her. But she
doesn’t count on the fact she’ll be disciplined for her disobedience!

Elodie Marshall and her friend are on holiday in Spain. They wake up one morning, after a night of drunken revelry, to find that they’ve wrecked the local bar, El Tigre. Owned by the handsome
Xavier Marcos, he demands they either pay him compensation or work for him until he’s satisfied they’ve paid their debt. Having no money, they have no option but to work for him. But Elodie finds it hard to work in the oppressive heat and soon finds herself in trouble with the handsome Xavier!

Gina and her best friend, Emma, decide to go on a working holiday, picking fruit at various farms. Their first job is at a farm owned by the handsome Mason McDonald. Everything goes well until Gina gets drunk one evening and decides to drive the neighbouring farmer’s tractor. She ends up letting some cows escape and gets caught red-handed by Mason, who has his own methods of discipline-a sound spanking!

Read these and other summer scorchers about girls behaving badly, in this romantic spanking collection!

Under the Cover of Love by Carolyn Faulkner