The Colonel’s Bride by Vanessa Brooks

The Colonel’s Bride by Vanessa Brooks 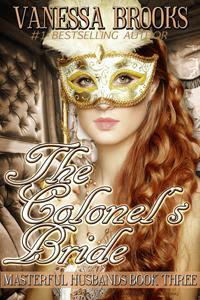 At nineteen, Claudia Weston feels she has been left on the shelf. Her father’s untimely death has plunged her into mourning just as she should have been making her debut. While watching her friends step out into society, find their beaus and begin to make plans for their nuptials, Claudia has a more intriguing quest in mind. Determined to find out about the more carnal side of life, she embarks on a campaign to discover as much as she can before she is married.

Taunted by another young woman for not yet having a beau, Claudia flippantly states that she is secretly betrothed. Having this imaginary fiancé serving his country far away allows her the freedom to enter rather explicit entries into her journal to satisfy her disbelieving friends. Imagine her shock when this fabricated fiancé materializes in the flesh. Claudia finds herself trapped by her own foolishness into a marriage with a handsome military gentleman, Colonel Guy French. Though she barely knows him, neither can deny the overwhelming physical attraction they experience.

She soon discovers that he has very particular ideas on how his new bride should behave. Watching Imogene and her friends within the ‘Spanked Wives Society’ receive husbandly discipline, Claudia has other plans. Considering herself a modern woman, she elicits a rash promise from her colonel to refrain from spanking her once they are wed. The old adage: be careful what you wish for, comes strongly into play as Claudia soon finds herself regretting her hasty decision. As events beyond her control pull them apart, can she alter her husband’s military methods of punishing her that leave her feeling abandoned and alone?

Will the colonel be able to set aside his beliefs in order to prove to his naughty bride that she means far more to him than any of his recruits? Though Claudia wishes him to change his mind and use a discipline that she now wholeheartedly desires, one which ordains him to take her across his sturdy thigh and soundly spank her mischievous bottom, will they be given another chance, or will it be far too late?

Join familiar faces as we once again journey into the English past with another of Vanessa Brooks’ naughty but light-hearted and romantic Georgian adventures.

Anson by Alta Hensley and Maggie Ryan is coming Tomorrow!