Trial and Error by Jae Martin 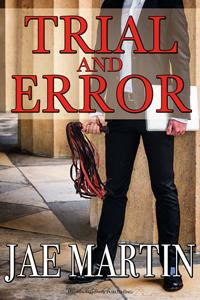 “Oh, shit, not again!”
Angela jumped up from the bed, leaning hard on her cramping leg. “I’m sorry,” she said. “It’ll be gone in a minute.”
“You need to figure out what to do about those,” Brian said, not unkindly. “They seem to be increasing.”
“I know,” she responded. “I think I have an idea. I Googled it and found a solution I’m going to try. There, better now,” she added as she returned to the warmth of the bed.
She snuggled into his strong body, her hand softly caressing his chest, teasingly pinching his nipples and then descending to his cock. He groaned softly as her hand encircled it, beginning the stroking and soft squeezing that never failed to pleasure him. As he shifted restlessly on the bed, she rose to her knees and, straddling him, began to kiss his body. She made her way over his strong chest, along the downy hair of his stomach’s center line to his shaft. Shifting to face his feet, she lightly licked the tip of his cock with her tongue, moving it up and down his cock, then taking him into her mouth. Grabbing the pillow, he propped up his head and admired the vision of her perfect ass as the pleasurable sensations flowed through his body. That further inflamed him so he slapped her ass hard and repeatedly. She moaned in response and swayed it, in further invitation. Tightening her lips, she took him in deeper and deeper, her hands stroking and kneading his balls.
Admiring her rounded, reddened ass, he put another pillow under his head and pulled her back to him, pressing her legs further apart to expose her pussy. The first stroke of his tongue almost unhinged her, bringing a soft muffled scream from her busy mouth. He licked her softly, then harder and harder, and her hips gyrated in response. As her juices flowed, he inserted one finger, two, then three, into her. Throwing her head back, she cried out in pleasure, so distracted as to pause in her rhythm. “Uh, unh!” he said, slapping her ass again, and she resumed her work with enthusiasm. Four fingers entered her, and she groaned in ecstasy as his knuckles pressed on her entrance. He began to pump into her, slowly at first and then with increasing pressure.
Frantic for release, she focused all her attention and effort on her rhythm until, unable to contain herself anymore, she released him to scream, “Please, Sir! Please, may I come?”
“Yes, come for me, slut,” he fondly answered, and her body bucked in the spasms of her orgasm. Her juices flowed down his arm like a waterfall until, sated, she collapsed on his groin.
“Turn around and continue, girl,” he ordered.
Facing him, she complied, going down on him again with renewed enthusiasm. Her tousled hair tickled his groin and thighs as he watched her work. Occasionally, she looked up at him, her hazel eyes both lustful and teasing, and she moaned softly with the rhythm of her strokes. She gasped as he suddenly grabbed her hair, pulling her mouth up off his shaft. Understanding perfectly, she quickly slid his cock into her. She leaned back on her arms, lifting her head and closing her eyes, and slowly began to pump on him. She sat up on her knees and circled her hips, stroking her body and cupping her breasts as he watched her.
Returning to the exquisite rise and fall on his shaft and inexorably increasing the pace, she came to ride him like a Brahma bull, head back, lips smiling, breath panting and crying out in full, passionate voice. He rested his hands on her sensually moving hips, his hips moving in response and both of them now glistening with a sheen of sweat. Her cries were matched by his grunts in a rising chorus until he grabbed her by the arms. She gasped as he suddenly flipped her over and straddled her.
For a long moment, he just looked at her as she submissively, nonverbally, begged him to take her. Then, take her he did, thrusting and pounding into her, pinioning her over and over until she came again and he exploded within her, collapsing onto her breasts.
They lay there quietly, catching their breath, until he heard a soft murmur begin from her. Enfolding her in his arms, he smiled, knowing what was coming. Her murmur turned into chuckles and then into peals of joyful, satisfied laughter. She giggled and laughed as the endorphins washed through her brain, and he held her, grinning in amused satisfaction and love. What a good little slut she was.
Angela snuggled further, if that was even possible, into Brian’s arms and sighed contentedly. Her mind wandered over the years they had been together as she drifted off to sleep, until one thought brought her abruptly back to the recent past. It was not always so good. She bent her head with a combination of shame and regret as she recalled her betrayal.
Damian had appeared, young and enthusiastic, already well trained as a submissive and very eager to join their BDSM house. He was also sexy and seductive, even within his perfect submissiveness. It wasn’t long before his flirtation with Angela began and the attraction between them grew. She didn’t initiate it, nor did she fight it very hard. Perhaps the natural wear of thirteen years of marriage had made her a little curious about the lure of a new romance. Brian had a fit, of course, when he found out. While affairs were something he could accept and understand, in their polyamorous relationship, he had never intended for a romantic triad that involved his wife and a submissive. Damian was out, although he departed reluctantly. They had gone through a very rough time before coming back together and had been monogamous since.
“Never again,” thought Angela, drifting off to sleep. “Risk this? I don’t think so.”