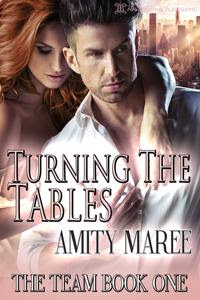 Tandy is shocked when a handsome man approaches her and calls her Miss Bainbridge. That was her father’s name, and she hated the man with her entire being. It was enough to make her lose her temper and behave like a hot- tempered spoiled brat, ending with Samuel Parker putting her over his knee and spanking her like she was a naughty child. Even worse, he kidnapped her and drove her to a secluded spot in the country. Tandy escapes, and tries to make her way back to town when two men suddenly appear and offer to help her – provided she is willing to pay them with her body. Samuel arrives in time to rescue her, and promises her a sound paddling when they return to the cabin.
Samuel is shocked when Tandy reveals that she is not the child her father presented her to be. She claims that the reason Bainbridge hired Samuel and his team to protect her was so he could keep tabs on her and have her killed. She offers to hire Samuel to protect her, and then tells him her real name, Tandy Sweet. Samuel is stunned to realize that she is the hottest singing sensation in London and Paris. He had been duped by Jude Bainbridge, and he promises Tandy he will keep her safe. Then he reminds her that she is owed a serious paddling for risking her life.
Chapter One is available for FREE
Now available at Blushing Books!
___________________________________________________________

The Outlaw’s Punishment by Sarah Black

A Little Misunderstanding by Markie Morelli