When a Cowboy Asks: A Rancher’s Bride, Book Two by Chula Stone

When a Cowboy Asks: A Rancher’s Bride, Book Two
by Chula Stone 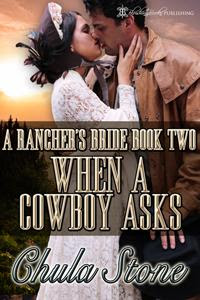 Merriview, Texas isn’t the place many men would come to find a wife, but Shep knows that he can get some good advice from his old friends there, so he agrees to make a delivery that’s sure to raise some eyebrows. The first girl he meets has him thinking of staying much longer than he had planned and the Sloan brothers and their wives are elated to hear it. Though Shep falls for the lovely Treli, he almost gives up on winning her when fate, and the feisty Pinkie Sloan step in.
What’s a cowboy’s solution when his questions go unanswered and his orders get disobeyed? The only choice to be made is whether to use a paddle or a wooden spoon. What better way to try to get a handle on the madcap mayhem that ensues than a good old-fashioned trip over his knee? Whenever the Sloans get involved, three things are for sure: laughter, love, and long spankings.
This book can stand alone, but readers who enjoyed A Rancher’s Bride: Skittle-pip will be glad to see old friends from Bumchuck up to their old antics.
Publishers note: This book contains scenes depicting adult women being spanked. If such material offends you, please don’t buy this book.
**Now Available!**

Enjoy this free Preview of When a Cowboy Asks by Chula Stone:

New this evening… An Author’s Angst by Maggie Ryan

Searching for Home by PK Corey